Imagine being in a room with colored lights dancing across the wall and ceiling, the sounds of the sea playing in the background and the smell of lavender in the air. 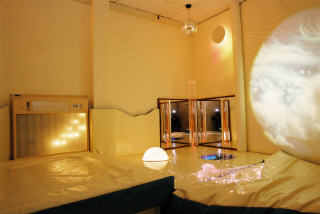 This is a SNOEZELEN room. Its effect is both stimulating and soothing, and for people who suffer from Alzheimer's disease and related dementia, it can be therapeutic.

SNOEZELEN (which is pronounced "snoozlin") sounds a bit like what it means. It is derived from the Dutch words for "to doze" and "to sniff," and it was initially used to provide relaxation for people with learning disabilities. Within the past decade, the therapy has gained popularity in United States hospitals and nursing homes because of its ability to relax and stimulate patients with Alzheimer's disease and other forms of dementia.

Millions of Americans are believed to suffer from Alzheimer's disease, according to the Alzheimer's Association. Alzheimer's is a degenerative, progressive disease that robs the brain of memory. While there are no medical treatments currently available to cure or stop the progression of the disease, there are medications to relieve the behavioral symptoms, such as depression, sleeplessness and agitation.

SNOEZELEN rooms, however, relieve Alzheimer patients\' symptoms without drugs. A SNOEZELEN room, such as the one facilitated by the therapeutic recreation department at the Merwick Unit of The Medical Center at Princeton, stimulates the primary senses, hearing, touching, smelling and seeing. It can also calm patients when they are stressed, relax them, and increase their range of motion. At the same time, the rooms can provide a good environment for bonding between an Alzheimer patient and his or her therapist, or between a patient and family members, for example.

A SNOEZELEN room is a controlled environment, an oasis where patients feel safe and non-threatened. This is important, because many Alzheimer's patients cannot control their environment.
Whether they are living at home or in a nursing home, they tend to get easily overloaded. The TV may be on, people may be talking and they may hear traffic outside. It overwhelms them. They lose their sense of cause and effect. They are unable to sort things out or to understand that turning off the TV may help calm them. Being in a SNOEZELEN room takes patients away from the pressures of their usual environment.

The time a patient spends in a SNOEZELEN room can vary. Some facilities allow patients to visit a SNOEZELEN room as they wish; others work with small groups of patients or one-on-one for short daily sessions with a recreation therapist. A short session, lasting 15 to 30 minutes, has been found to be effective in decreasing Alzheimer's patients' tendency to wander for up to four hours afterward. They tend to be more relaxed and less agitated.

There are different SNOEZELEN rooms with different equipment. There are adventure rooms, white rooms and a variety of rooms. However, all are structured environments. They may contain a panel of colorful lights, bubble tubes or walls, and a projector and color wheel, which throws images, usually, pictures, across the ceiling and walls of the SNOEZELEN room.

{mospagebreak}Color wheels may feature a forest scene with changes of season, the New York City skyline or a Fourth of July parade. They provide visual stimulation and often encourage reminiscing or conversation. Patients who don't speak frequently may say one or two sentences, or tell a whole story, while watching the images float by.

A bubble wall with tiny bubbles floating upward, much like a giant fish tank without fish, provides visual stimulation as well as auditory stimulation. Research has shown that white noise, such as a bubbling sound or lapping of waves upon a shoreline, can have a very soothing effect.

Another major feature of a SNOEZELEN room is aromatherapy. Research has also shown that different scents stimulate or soothe. Lavender, for example, is very soothing and orange is stimulating.
A SNOEZELEN room is designed to be stimulating, but not overwhelming. The use of equipment depends on the patients and it is often through trial and error that a recreation therapist discovers what works best.

High-functioning patients can usually cope with more multi-sensory stimulation. However, someone in the later stage of Alzheimer's may easily get overstimulated if too many things go on. For example, tossing a ball in the direction of someone who is highly agitated could make that person fearful. But if they have light scarves of neon pink and orange floating toward them, their reaction is quite different.
Alzheimer\'s patients may reach for the therapeutic scarves, or touch the bubble wall. They may talk about the pictures floating by on the wall, or they may relax as they listen to quiet music and sit back against a vibrating pillow.

For family members of Alzheimer\'s patients, who often feel frustrated that they can't engage in a conversation with their loved one, a SNOEZELEN room may provide a common bond that they both can discuss. The SNOEZELEN therapy won't increase a patient's recognition of a family member, but it can increase the rapport he or she has with that person.

SNOEZELEN rooms do not reverse the progression of Alzheimer's or other forms of dementia. However, the therapy is very goal oriented. If being in a SNOEZELEN room for a half hour each day helps a patient feel less fearful, less stressed, calmer and more relaxed, then the quality of that person's life has been increased that day.

More in this category: « Psychedelic room helps dementia patients The effects of multisensory environments on older people with dementia »
back to top